Today's post is different from my regular ones. For starters, it's my first post for "Tuesdays with Dorie: Baking with Julia". What's that, you ask?? Well, its an online community of food bloggers that will bake the same recipe on a tuesday, every two weeks. It will be a recipe from culinary grande-dame Julia Child's baking bible, "Baking with Julia", randomly chosen by a member of the group. Last time I checked, the group had over 350 blogs participating.

The book has a reputation of being quite demanding and technical, putting it quite at odds with the recipes I usually post on this blog. However, this was something I decided to take up to somewhere push myself as a baker and attempt those recipes that "you-look-at-but-never-do-try-out"!! Out of copyright considerations, the recipe for the day will only be posted by the blogger who is hosting the recipe for the fortnight. Hence, many a times, the post will be anecdotal in nature with me describing my tryst with the recipe. 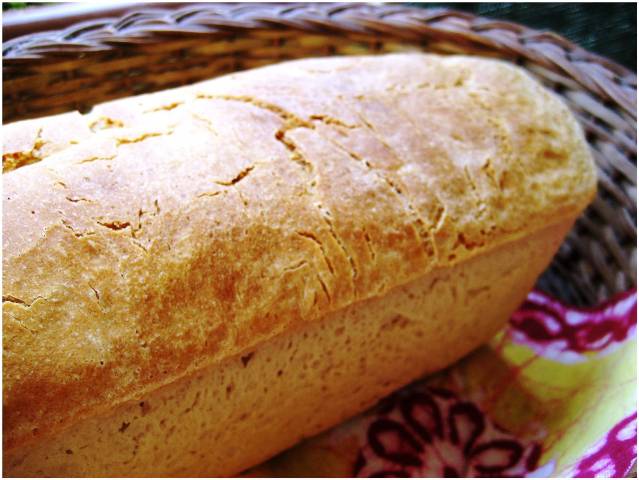 I must admit, I silently groaned when I saw the recipe that had been chosen. Yeast and I have never really been friends! And it's not due to lack of effort on my part. I have tried and tried but the yeast would just NOT yield. And then to make things worse, I realised I did not have a bread-loaf pan to bake the loaves in!! I panicked and almost chickened out!! But then reasoned that if there was ever a time to bake a bread, it was NOW and with this recipe!

To make matters interesting, not a single baking equipment shop that I went to had the bread-load pan that I needed. I finally compromised and bought a glass loaf tin and hoped it would do the job!! Before you roll your eyes, I must tell you also about the packet of yeast I bought. Most of the time, it is really tough to buy decent yeast of any variety in India and I decided to put my faith in a tiny packet of yeast that I found in my local neighbourhood store. It had dodgy instructions at the back and kept mis-spelling the words recipe as "receips" and bowl as "below"!! Now, you may go ahead and roll your eyes. But,I insist, please do READ on!!


I read the recipe thrice and decided to make only one loaf. Faith in myself and yeast was so low that I could not get myself to use the 7 cups(!!) of flour that the recipe required to make 2 loaves. With immense trepidation I set out with the recipe and followed it step-by-step. Ideally, the recipe requires a heavy-duty mixer. But, of course, I didn't have one and thought my little hand-mixer with a dough hook would do. It did NOT and I had to knead the dough for most of the time. The story of my forearms I'll leave for another day!! 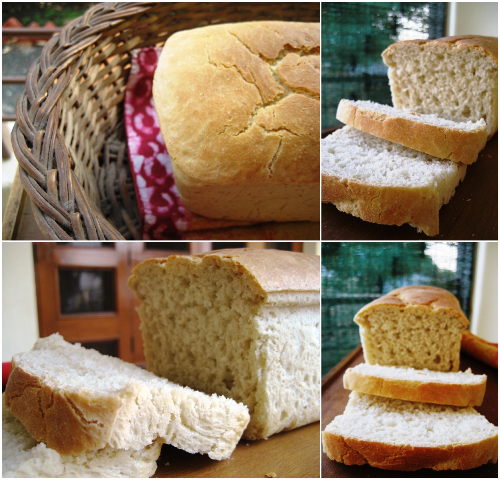 Call it beginners luck, the stars being in the right place, the strength of my forearms (?) or the beauty of this recipe but that little dodgy packet of yeast performed beyond expectations!! The dough on first rise more than  doubled in size and after that everything was a breeze!! Maybe, fortune does favour the foolish, at times!!

More than 3 hours after I started, my kitchen smelt beautiful and I was in possession of a beautiful, golden loaf of bread!! My limited vocabulary of food cannot do justice to the taste of this loaf. It was, simply put, delicious!! It was soft, airy and you could eat it all by itself!! I put a blob of butter on some hot toasted slices, saw it melt and then took a bite.. sublime!!

Would I recommend this recipe, my answer would be an honest yes and no, depending on how comfortable  you are with baking!! If you are new to it, I'd hold off on this recipe for a bit and wait until you are more comfortable with baking recipes and equipment. However, this is a must-try for the enthusiastic baker who wants to try something beyond the usual cookies, brownies and pound cakes. If there is a recipe for a white loaf you want to try, let it be this one!!!
I won't be posting the recipe for the "White loaves" due to copyright considerations, as I explained before. You will find it on the blogs of the hosts of the recipe - Laurie & Jules. Alternately, you can e-mail me at bakerindisguise@gmail.com and I will be more than happy to share the recipe with you!!
Posted by baker in disguise at Tuesday, February 07, 2012