Oh dear dear, Summer's here! Normally I would have begun on my rant but that's so predictable that it's pointless. So, instead let's talk about things that I think will interest you.

Last week, Monica Bhide, food writer, storyteller and in the words of her book, 'culinary explorer, cultivator and teacher', asked on Facebook if anybody would like to read her soon to-be-released book, 'A Life of Spice'. Of course, I put up my hand and she very graciously sent me the Kindle link to her book. I started it on Saturday afternoon and read it pretty much uninterrupted till I finished it by Sunday afternoon.

The book is a collection of essays that Monica has written over the years. To say that it is about food or about Monica's love for food would be missing the point completely. Her stories are about how the memories we have and the memories we look to create are invariably and inextricably linked with food. 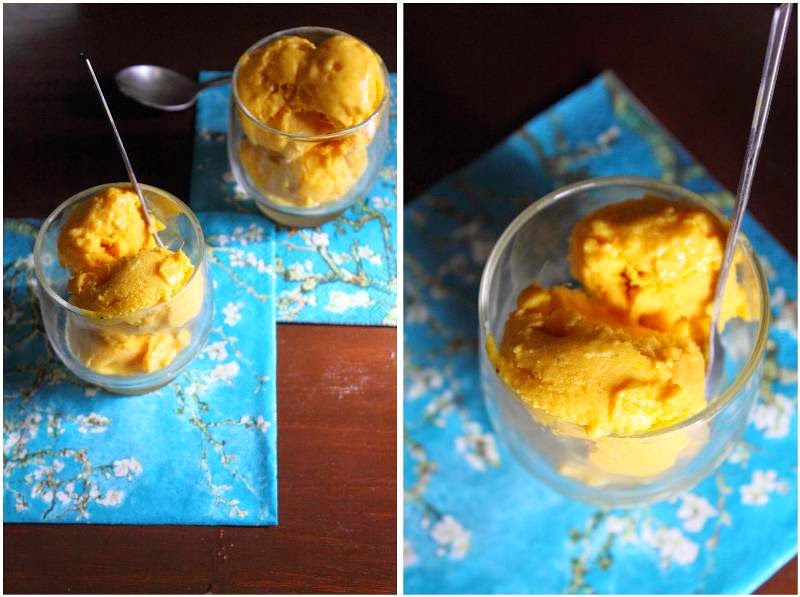 Of the family who will always remember their last meal as they leave their home forever, never to return. Of the adult who will always become a child when she returns to her parent's home, craving the dishes of her childhood. Of the experienced cook who will always remember all the disasters as a novice. Of the mother who feels her child is growing up too fast and holds on to those precious moments when they bond together over the kitchen counter. Of the immigrant who has adopted a new country but will never shake off the food and customs of the homeland. These and many more of Monica's stories bear testament to the fact as time passes and life moves on and change is inevitable, we are left with memories and more often than not, they have a connection with food.

And while these stories are a peek into Monica's life, they are so evocative that they compel you to explore your own 'Memory's Kitchen'. Read the book and you will understand where I get the term from!

Monica confesses to a torrid romance with food and she proves it when she deftly brings it to life in her writing. "...coriander whimpers, cumin smolders, mustard sizzles, and cinnamon roars.." is just some of the magic she creates with her words! 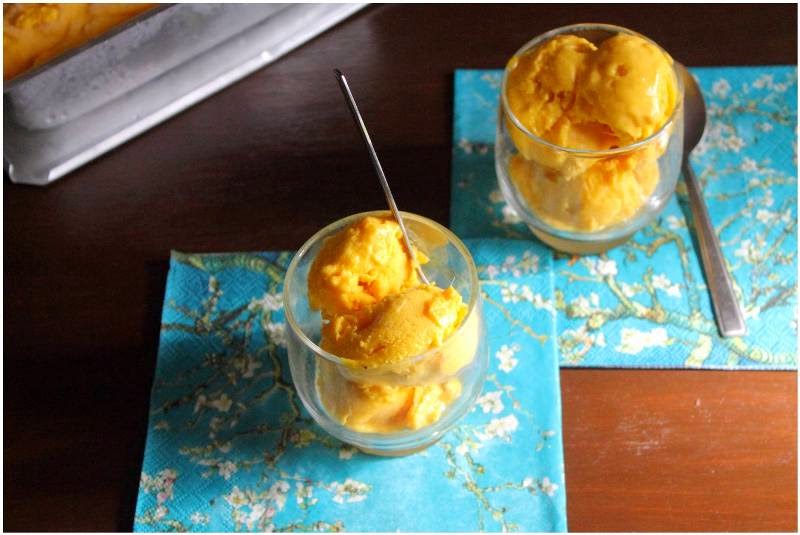 And talking about food, I made some mango and banana frozen yoghurt. The weather is certainly calling for it. It takes just three ingredients and it's so fuss-free, I don't think you can even calling it cooking.

You can't fault the dessert but I would make two suggestions to make it better. We are right in the bang of mango season and I wonder if the banana was really necessary. Personally, I would stick solely with the mango.

And secondly, you know I don't like my desserts cloyingly sweet and yet I found this dessert lacking something. I won't recommend that you add sugar but rather you drizzle, a generous amount at that, of honey over the yoghurt. It instantly transforms it from the ordinary to the elegant. Perfect for lazy summer weekends! 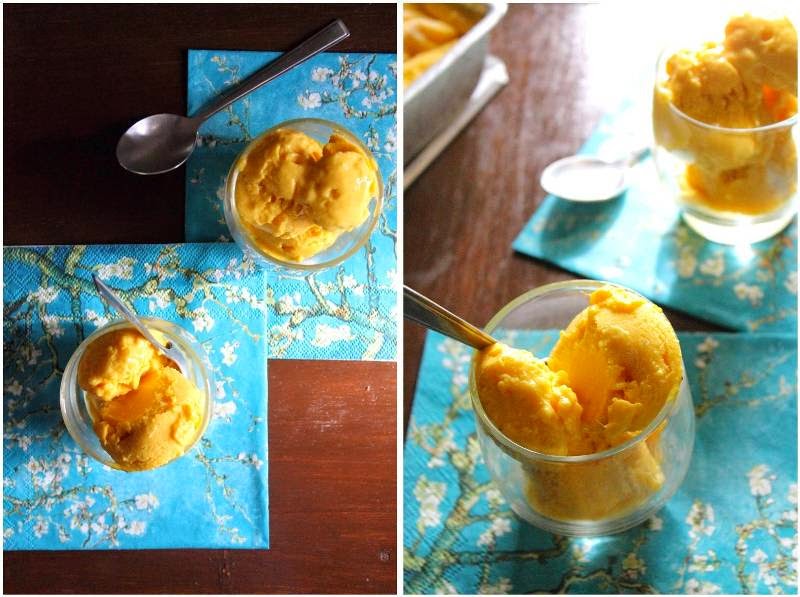 Before I sign off, I'd like to draw your attention to a petition by Dastkar to protect the intellectual property rights of India's traditional handloom weavers from the powerful powerloom lobby. Please do take time to read this petition and sign up your support to protect India's rich textile legacy.

Over the weekend, a powerful earthquake hit Nepal and we've seen the devastating images all through the weekend. For those looking to donate/help/volunteer, this link might be of help. A prayer for the victims as they stand vulnerable and defenceless in the face of Nature's might!

While I like to flavour my food and desserts with a dash of alcohol, I am not much of a drinker. Despite that I tend to be partial to liqueurs.  I'm always ready to sample a new one. Maybe because I am intrigued by the flavours with which they are infused with. Whether they are infused with fruits, herbs, flowers, woods or spices, they all have a little story that speaks of the region they come from or I have a little story to go with it.
Like the first time I tried cherry liqueur was in Sikkim, in India's north-east corner. Having returned to civilization after a week of trekking in the mountains in the area, we were offered a glass of it as a welcome drink at the hotel we were staying. The luxury of the drink after a week of roughing it out was a memory that won't be forgotten easily! Or like the time, I had my first taste of ouzo, the Greek aniseed liqueur, in University, thanks to a bottle that a Greek flatmate had lugged all the way from home. And how he diluted it with water because he didn't trust that we would be able to handle its high alcohol content!
And then there's Baileys, for which I will always have a soft spot. I was allowed a taste of it, I think, while I was still in school and that taste of sweet cream tinged with alcohol has remained a favourite. 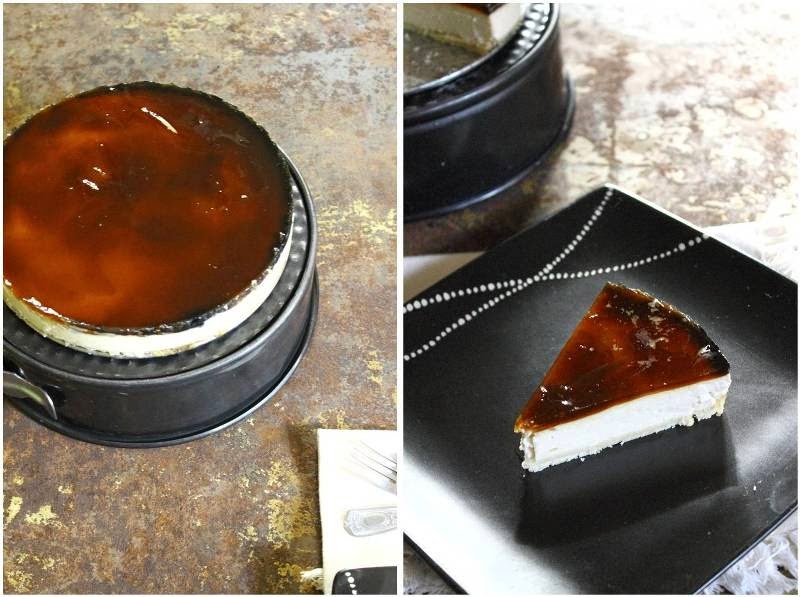 I had in an earlier post talked of making my own vodka based fruit liqueurs. It's all very simple except that they all have a resting period of a few weeks to let the flavours infuse. Turns out, its even simpler to make your own homemade Baileys. And there's no resting time. Just whisk everything in a bowl and a bottle of Irish cream is at your command!!
My sister and I had made it a few years back and I thought I revisit making it over the long weekend. Try it for yourself and you won't get over how ridiculously easy it is. The recipe is from 'Farmette', Imen's charming blog as she chronicles her life on an Irish farm.
Because, it is a cream based liqueur, you are advised to finish it off in 2 weeks. So, either you give the gang of friends an invite to finish off the bottle or you hunt around the Internet for a recipe that will do the same. I zeroed in on a Baileys cheesecake. 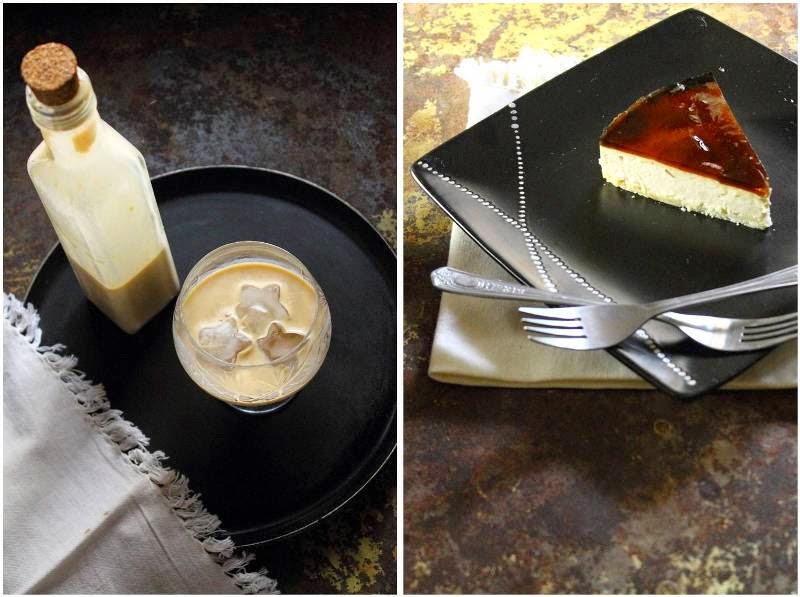 I have gone with a no-bake cheesecake because I already have a recipe for a baked cheesecake that is gold. And baking it, would have taken away all taste of the Baileys as most of the alcohol would evaporate during baking. I also experimented with agar agar powder instead of gelatine and the results were extremely favourable.
I baked my base only because I couldn't find any digestive biscuits at home to make a no-bake biscuit base. But, you can always make a biscuit base. It will be easier and less fussy. Despite using a substantial amount of Irish cream, the taste of it is subtle in the finished product. The thin layer of coffee jelly not only helps with the presentation but helps to cut through all the creaminess that could get a bit too heavy, if left all by itself. 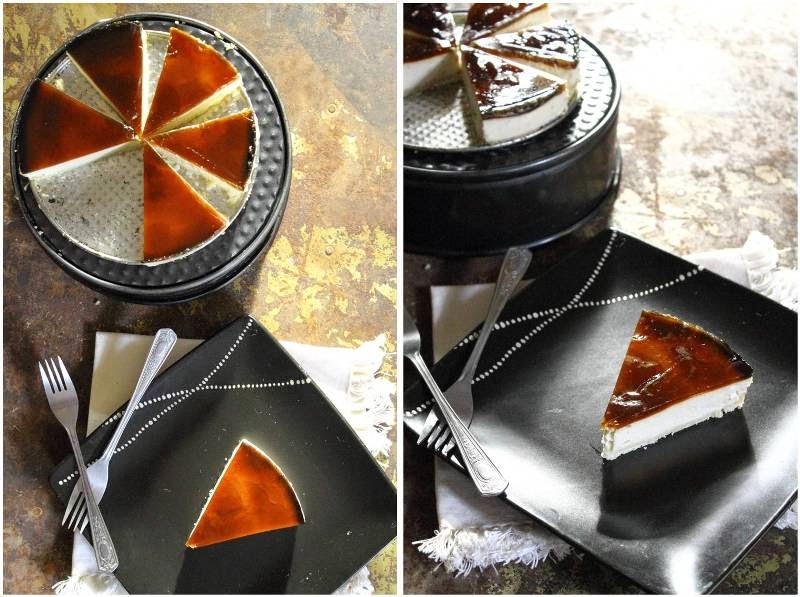 This would be perfect as a grown-ups dessert for a weekend dinner. I think you'll enjoy it as much as we did.
And what about you .. have you tasted any interesting liqueurs that come with an even more interesting story?? I'd love to hear about it. Hope you enjoyed the long weekend!!
Read more »
Posted by baker in disguise at Wednesday, April 08, 2015 2 comments