When the "TWD: Baking with Julia" group chose 'Rugelach' for this week's recipe, I was more than ready for it. In my wanderings across the world of food blogs, I had come across these croissant-shaped cookies and their unique shape held enough appeal for me to say, "I have to make these one day!!".

For those not in the know, Rugelach (pronounced as rŭg’ə-ləKH) are rolled cookies of eastern European, Jewish origin made from a cream cheese dough and stuffed with fillings that could include nuts, dried fruits, chocolate, cinnamon and fruit preserves. Got your attention too, didn't that!??! 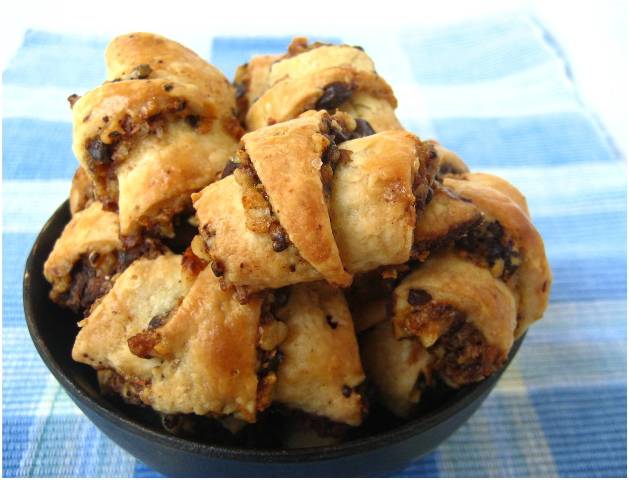 So, with much enthusiasm I opened the page to the recipe only to realise with horror that the recipe had decided to use an alternative method to making these cookies. The recipe prescribed constructing the dough and the filling along the lines of a Swiss roll and then cutting the roll into slices to make pin-wheel shaped cookies. 'Eh?? no croissant-shaped cookies?!!?', I despaired and walked away. Only when I read other bloggers comment on the forum that there were going to go ahead with the croissant-shaped cookies that I was lured back to the recipe.

The dough was extremely simple to make, a bit on the softer side but that was expected with the amount of cream cheese and butter used. And I did only make a third of the dough because if the cookies did not turn out as expected, I had no clue what to do with 4 dozen of them!! For the filling, I modified and decided to go with the apricot lekvar, walnuts, cinnamon sugar and chocolate!! I was keen on making the apricot lekvar because, let's face it, sitting in India there is not much chance of me coming across any of it. It is essentially a thick puree of rehydrated dried apricots, sugar and lemon juice.

For the technique I turned to pastry chef, Zoe Francois post on rugelach where she clearly explains step-by-step on how to assemble these cookies. With the dough and filling ready, I was good to go...after all I thought...it all looked so simple.... 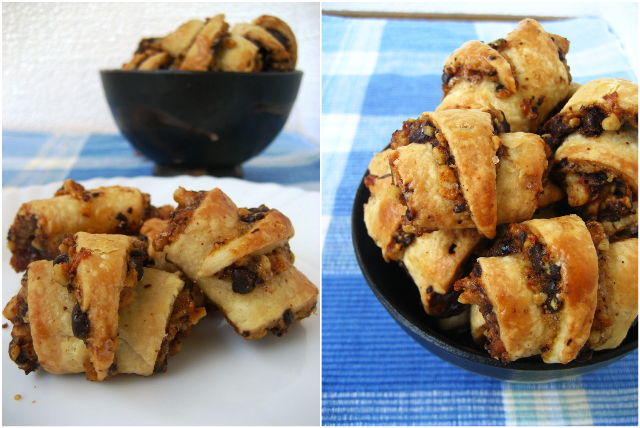 Well.. not really..as it would turn out. The Indian summer has started making its presence felt and that was bad news for the cream cheese dough which turned too soft too soon too often. At one time while working with the dough,  I kid you not, I was refrigerating it almost every five minutes before I could go to the next step. The entire process of rolling out the dough, filling and then rolling up the triangles of dough tested the limits of my patience like none other....if only I could show what a mess my kitchen counter was by the end of it all!! I would have liked the cookies to have an extra fold around them but by the time I was done I was past caring!!


Overnight in the refrigerator and they were ready to be baked the next morning. After the mess of the night before, I must confess, I wasn't really looking forward to these lil fellas!! But then...few minutes into baking and with the aroma of cinnamon sugar invading my kitchen...the world was beginning to look a better place!!
Once baked and cooled, a pleasant surprise was in store for me!! The cream cheese dough was beyond spectacular...flaky, sweet and golden brown (thanks to a cream wash)!! All the flavours of the filling had come together...a hint of cinnamon, a hint of apricot, a hint of chocolate... with no particular one overpowering the other. But, for me that dough was clearly the winner...I have never tried it before...and if you haven't.. you too are really missing something. Before I baked them I thought these rugelach would be an one-off affair but after tasting them you realise they are too good to not be made again!!!

Due to copyright considerations, only the person hosting the recipe for the group 'TWD:Baking with Julia' can post the recipe on their blog. The recipe for the rugelach will be available on the blogs of Jessica and Margaret. Alternately, you can write to me at bakerindisguise@gmail.com and I will mail you the recipe.
Posted by baker in disguise at Tuesday, March 06, 2012