Keeping St.Patrick's Day in mind, the 'TWD:Baking with Julia' group settled on an Irish Soda Bread for our next bake-together. Soda bread is one of the easiest bread recipe floating around. It is, especially, for those who've always wanted to make bread but don't want to go through the trouble of kneading the dough or, for whatever reason, harbour a fear of yeast..remember my white loaf of bread!! It comes under the category of 'quick bread' and when they say quick....well, it literally takes 5 minutes to get the dough done before you put it in the oven!!

After all the fuss that the rugelach created, I think everyone in the group must have been happy to see a recipe that required just 4 ingredients and took all of 5 minutes of work!!! Before, I get to my baking experience, can i just admit that photographing the soda bread has been my most difficult photographic experience to date. It tested the capabilities of my compact camera as well as my nascent photographic skills like nothing before. So, please bear with the photographs even as I begin the hunt for a digital-SLR.... 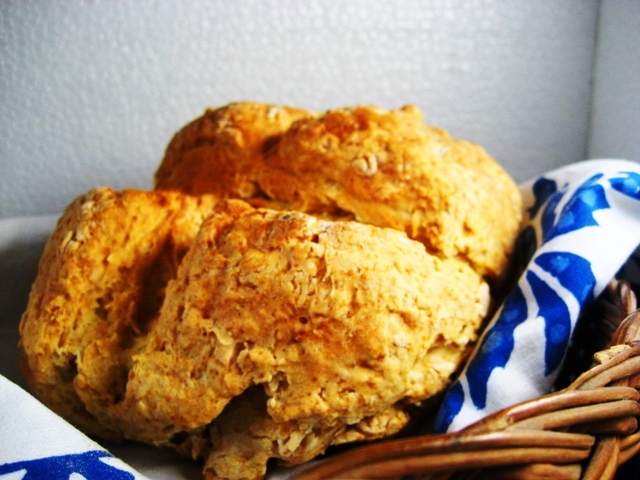 Moving on.. while the recipe does not have yeast, it does rely on soda bi-carbonate to be the raising agent. Buttermilk is then used in the recipe and the resultant chemical reaction between it and the soda bi-carb is what makes the dough rise. Kneading is kept to the absolute minimum (about one minute!!), just until the flour mixture comes together. Pop it in the oven for fifty minutes and you are done!!

All extremely simple except that it seems almost fated that every time I attempt to make bread, there has to be a little drama. In this case, five minutes into baking and we had a power cut!! It is Murphy's special little law for home-bakers in India that all of us have encountered sometime or the other - "Think you have done everything the recipe asks for and are feeling confident and there will be a power cut few minutes into baking!!" 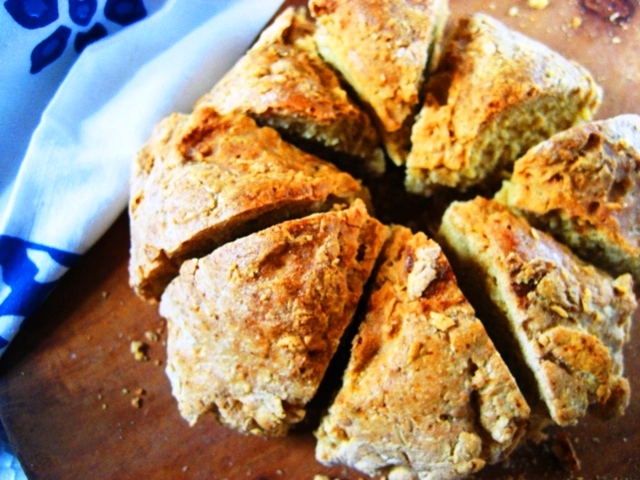 Luckily, Murphy was countered by a lucky Leprechaun and ten minutes later, the electricity was restored. Because the oven had been pre-heated for a while, it did not affect the end result too much... Phew!!

Much like the artisanal breads that are becoming increasingly popular these days, this bread has a rustic feel to it. The 'X' slashed on top giving it an almost, medieval look! The hard, golden-brown crust on the outside hides a soft inside, though do not expect it to be as airy as a yeast bread. Like most of the recipes in this book, the recipe delivers superlatively on taste!! 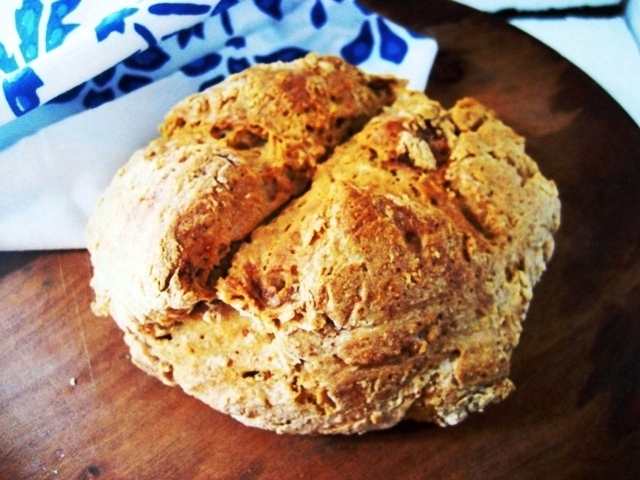 The recipe is simple enough to be attempted by a novice baker. In fact, if bread making intimidates you, start off with this recipe as the results will not disappoint! Made in just under an hour's time, it can be eaten alone with butter slathered on  or as an accompaniment to a soup or a stew. And that's what i did..re-created an Irish supper in India - Irish soda bread along with some hearty, Irish lamb stew. I'll leave it to your imagination on how good it was to mop up the stew gravy with this crusty bread!!

Due to copyright considerations, only the person hosting the recipe for the group 'TWD:Baking with Julia' can post the recipe on their blog. The recipe for the Irish soda bread will be available on the blogs of Carla and Cathleen. Alternately, you can write to me at bakerindisguise@gmail.com and I will mail you the recipe.

Email ThisBlogThis!Share to TwitterShare to FacebookShare to Pinterest
Labels: Baking with Julia, bread