Although America has a grand tradition of baking with pumpkin around this time of the year, the idea has never really appealed to me. It's not that we don't get pumpkins in India. Oh we do and plenty of it!! Drive through the rural countryside and you will see them growing on a vine along the roofs of people's homes!! But it's largely cooked as a savoury dish and for someone who till very recently thought about baking only in terms of chocolate, the very idea of pumpkin in a cake was a bit off-putting, to be honest.


But lately, I have been intrigued ... I have seen pumpkin pies, muffins, cheesecakes, candy, bread, cake on every other blog I've been to in the past two weeks ...I've read the recipes, gawked at the photographs and finally, told myself 'the time has come'!! So, this week's 'TWD:Baking with Julia' choice of recipe, Cranberry-Walnut-Pumpkin Loaf, could not have come at a more opportune time!! 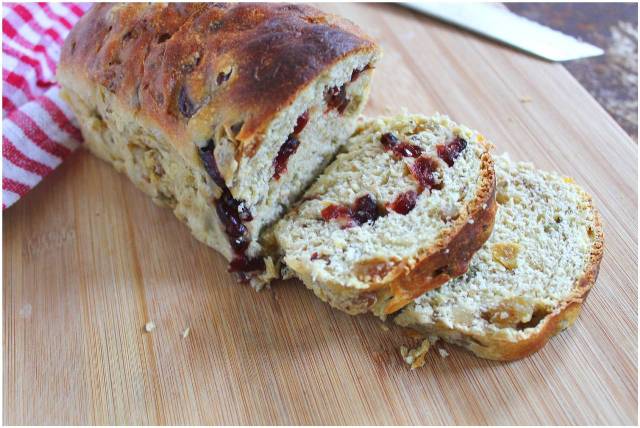 The recipe is a yeasted bread dough that has roasted pumpkin puree, egg, toasted walnuts, raisins and cranberries (I used dried ones) added to it. Much like the brioche dough that we used for these buns, the dough is kept overnight in the refrigerator after one rise and before it is rolled into shape for the second rise.
This is an extremely sticky and wet dough to work with but apart from that there is nothing difficult about this recipe. However, with all the waiting required, it does take almost a day to make from the time you first start. 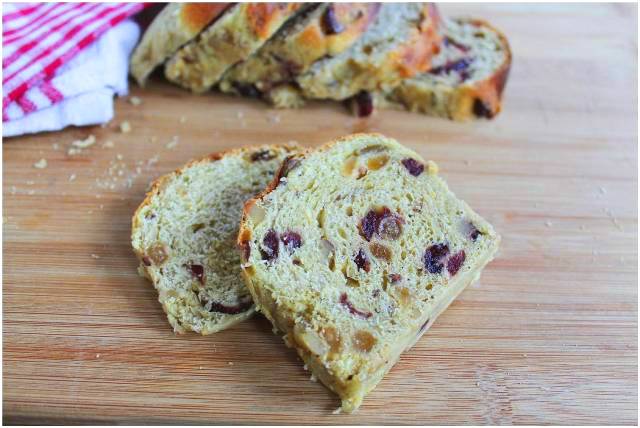 The dough rises beautifully and because of the presence of the egg, it bakes into a beautiful golden-brown crust, complete with some of the cranberries peeking out from the top. It helps that with the cinnamon and nutmeg present in the dough, your kitchen smells beautiful!!
As for the taste, no, you do not taste the pumpkin. My question.. is that normal, for when you bake with pumpkin?? Is it just there for texture and volume and not so much for flavour??? But apart for that, this bread is along the lines of a sweet fruit bread. With the toasted nuts, sweet raisins, tangy cranberries and cinnamon, it begins to evoke the flavours of Christmas, just a teeny bit!! You can have a slice of it plain or lightly toasted. We preferred the latter option!! 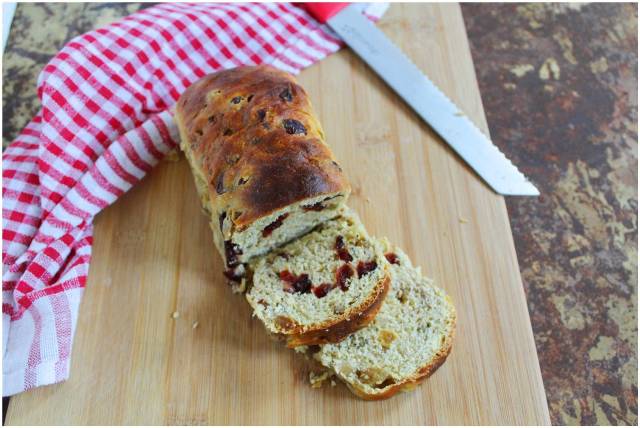 My issue with this bread is not so much with the recipe. It is more to do with the fact that with the same flavour combinations, instead of a yeasted dough, this could have been made along the lines of a 'quick bread'. The texture would have been more cake-like, saved us a lot of time and it would have still tasted just as good. In fact, I've seen recipes where orange juice has been added to a similar quick bread .. now, how good would that have been??? Just a thought....


Due to copyright considerations, only the person hosting the recipe for the group 'TWD:Baking with Julia' can post the recipe on their blog. The recipe for this loaf will be available on Rebecca's blog. Alternately, you can write to me at bakerindisguise@gmail.com and I will mail you the recipe
Posted by baker in disguise at Tuesday, October 02, 2012