Every once in a while, I come across a baking recipe that I've never tasted, seen or for that matter, even heard of!! Popovers, today's choice for the TWD:Baking with Julia group, falls in that category. I didn't even know whether it was a cookie, a cake or a bread!!

Initial research on the Web revealed that it was the American equivalent of Yorkshire Puddings. That wasn't really helpful ... I've never had Yorkshire Pudding!! A little more digging around and it turns out, it is a "light, hollow roll", that maybe had at breakfast or afternoon tea with a drizzle of honey and butter. It can also be had with roasts and meats for dinner or lunch. 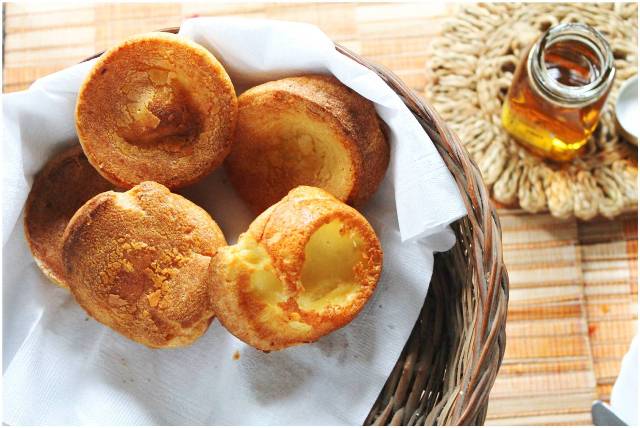 It is made with a simple milk-flour-egg batter that is poured into muffin tins, or if you have it, a special popover pan. Once placed in the oven, within few minutes, the batter expands and puffs out of the moulds. The end result should be a golden-brown roll that has a crisy, puffed-up crown that is hollow in the middle and has a slight custard-like interior!!

There was no way I was going to get a popover pan in India and so, went ahead with a muffin tin. The process is a simple one. Simply whizz together all the ingredients in a bowl, pour the mixture into the moulds and then pop them in to the oven. 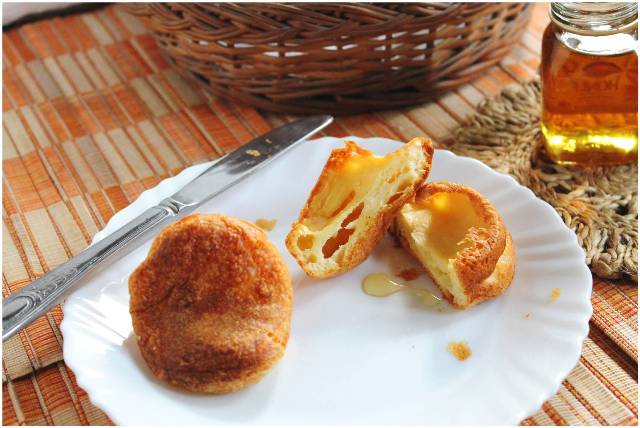 As promised, within a few minutes, the batter puffed up and popped out of the moulds. Everything was going according to script. It is when I pulled them out that I got confused. I had the crispy, puffed up tops. I had the hollow interiors. It even seemed that the interiors could be called 'custard-like'. But, most of them had puffed up so much that when I got them out of the moulds, there didn't have any bottoms... they had the sides.. but no bottoms!! Yikes, that can't be right, I thought!! Could someone clarify if that can actually happen or did I do something wrong!??!

But, how did they taste, you ask?? I drizzled a bit of honey on them  and had a bite. First impressions, they were a bit too eggy for my liking. And then when I thought about it a bit more, I realised that if I took a bite of it with the honey, with my eyes closed, I would have probably thought it was something close to a french toast!! 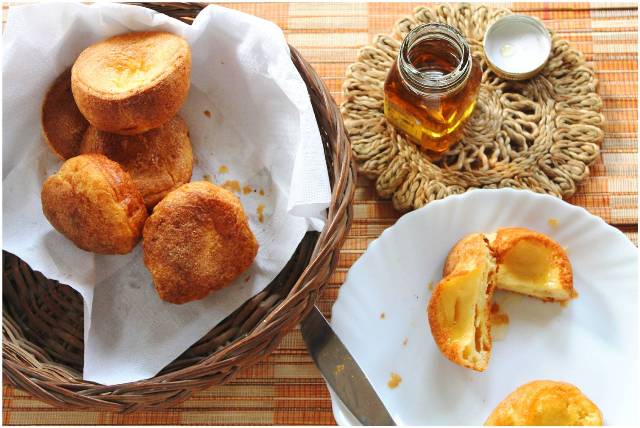 Dorie Greenspan writes in the book how Popovers conjure up childhood memories for many Americans. In her words, it is "the messy thrill of eating popovers dripping with butter and honey". Unfortunately, I could not quite see their appeal. I did not love 'em or hate 'em but they left me feeling rather confused. I just didn't see the point of them!! I put it down as a learning experience and am ready to move on!!


Due to copyright considerations, only the person hosting the recipe for the group 'TWD:Baking with Julia' can post the recipe on their blog. The recipe for these Popovers will be available on the blogs of Paula and Amy. Alternately, you can write to me at bakerindisguise@gmail.com and I will mail you the recipe.
Posted by baker in disguise at Tuesday, August 21, 2012

Email ThisBlogThis!Share to TwitterShare to FacebookShare to Pinterest
Labels: Baking with Julia, bread